Graphic Facilitation Lesson – How to Draw Faces and Emotion

Would you like to be able to learn how to draw faces in a simple, easy way that works every time? If so, read on!

In a previous episode, I spoke about the importance of being able to draw people and how it’s at the heart of great visual storytelling, visual communication and any type of graphic facilitation when you are working live with a group.

Why? As said, it creates a connection with your audience as they can recognise themselves – or someone else in that story. This creates empathy and a stronger human and heart felt connection.

What creates even MORE empathy is the ability to draw people’s faces and the various emotions we all feel. That’s when you have an even stronger buy in. We all understand the stories behind a happy face or a confused face and when you combine these the posture and body movements, you have storytelling magic.

After attending one of my Learn Graphic Facilitation Workshops, I spent some time with master film maker, keynote speaker and video magician Julian Mather and we explored just how easy it is to create awesome storyboards through drawing emotion on people’s faces.

But hang on….Aren’t faces really hard to draw? YES!! Faces are very complicated to draw realistically. And when it doesn’t work out, our Creative Ogre jumps in and tells us, “you’re not creative! Stop doing any type of creative anything! Especially drawing!”

The good news is that we only need 10% realism for our brain to look at something and go “a-ha, I get it!”

That’s why I created such a simple way to learn to draw faces that works every time and kills off that nasty Creative Ogre in the process.

This approach really works and you can go so much deeper in your conversations using this as a compliment to what you do already. Think of emojis. We ‘get’ those faces in an instant and they say so much more than text by itself ever can. There is a real story behind every face.

This is particularly useful for anyone involved in coaching, change management, facilitation, leadership or who has to in depth conversations. It’s a great way to check the energy in a room or check in and see how people are feeling and what they are thinking by getting them to simply point to a face, rather than having to find the words to explain something. Coaches I have worked with say it’s a great way to take the heat out of a difficult conversation by bringing in a third element, rather than just two people staring at each other.

As said before, this is a massive productivity tool. You can save so much time by not trying to type out these ideas OR trying to put them into a PowerPoint presentation with squares, squares and more squares!

So, make sure you give this a go and see just how easy it is to learn to draw people's faces.

Here’s to a more creative world. 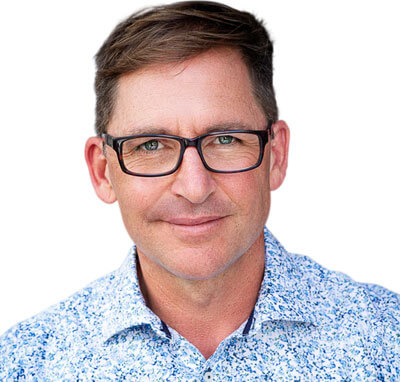 Simon Banks is an author and international keynote speaker on creativity and innovation and a happily recovering artist.  He describes his geek out spot as the intersection of creativity and design, learning, people and passion which he sees as essential building blocks for future leaders and developing an innovative culture.

Simon lives and breathes creativity. He has exhibited his art both in Australia and the UK, has lectured at the National Gallery of England and developed programs for institutions such as The Museum of Contemporary Art in Sydney.  He is the author of A Thousand Little Lightbulbs: How to kickstart a culture of Innovation in your Organisation.

His Big Why? To build a more creative world to enable people and business to thrive in the Modern Age.

If you would like to work with Simon or learn more about his Graphic Facilitation Workshops, get in contact today!